“…about 90% of women
experience 4 to 8 years of menstrual-cycle changes
before their periods finally stop at menopause”.1

Umbrella
What may the Periods and Menopause Umbrella include?

How can most women tell if they are approaching menopause?

According to the (United Kingdom) NHS:

“The first sign of the perimenopause is usually, but not always, a change in the normal pattern of your periods, for example they become irregular”.2

Do periods simply stop or not?

Not usually. In Menopause FAQs: Menopause Symptoms – Q. I am bleeding more often and with heavier periods than I used to. I’m 45 years old. What’s wrong with me? the North American Menopause Society (NAMS) elaborate on: “A. Probably nothing. As a woman reaches perimenopause, changes in menstrual flow and frequency are common. A few women simply stop menstruating one day and never have another period. But about 90% of women experience 4 to 8 years of menstrual-cycle changes before their periods finally stop at menopause. Most women report irregular periods. These are caused by erratic production of hormones by the ovaries and less frequent ovulation”.3

Is it possible to become pregnant when skipping periods?

“Skipping periods during perimenopause is common and expected. Often, menstrual periods will skip a month and return, or skip several months and then start monthly cycles again for a few months. Periods also tend to happen on shorter cycles, so they are closer together. Despite irregular periods, pregnancy is possible. If you’ve skipped a period but aren’t sure you’ve started the menopausal transition, consider a pregnancy test”.4

No. On page three in the World Menopause Day 2017: Patient Information Leaflet – Changes Before the Change: Should I Visit My GP? the International Menopause Society elaborate on: 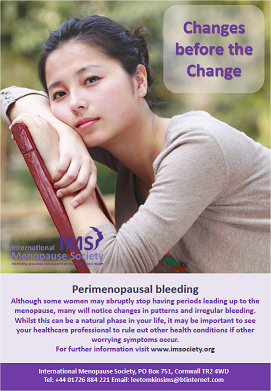 “Many women experience Abnormal Uterine Bleeding (AUB) during perimenopause. AUB is defined as bleeding that differs infrequency, regularity, duration or amount to your regular menstrual bleeding. Changes to the menstrual cycle often carry no significant consequences; however,they could have a range of causes. Although it may simply be a symptom of perimenopause, it is still sensible to raise the issue with your health care professional. A thorough history and physical examination will indicate the cause of uterine bleeding and help discern the need for further investigation and treatment”.5

Where may I find a menstrual calendar to keep a record of my periods?

In MenoNotes the North American Menopause Society (NAMS) include:

What if my periods are changing?

If your periods are changing, it may be in your best interest to choose to ask your health care provider about this.

In Menopause FAQs: Menopause Symptoms – Q. I am bleeding more often and with heavier periods than I used to. I’m 45 years old. What’s wrong with me? the NAMS also note:

“A. …But, it should not be assumed that any abnormal bleeding is simply a part of normal menopause. Most of the time it is, but abnormal uterine bleeding can be a sign of other problems such as fibroids, polyps, infections, and even cancer. It’s always best to be evaluated by a healthcare provider if the bleeding is very heavy or prolonged”.6

In Menstrual Calendar the NAMS include:

“Call your health care provider if you experience:

In Perimenopause: Living With – How Do I Know If Changes In My Periods Are Normal Perimenopausal Symptoms or Something To Be Concerned About? the (United States) Cleveland Clinic explain:

“Irregular periods are common and normal during perimenopause, but other conditions can cause abnormalities in menstrual bleeding. If any of the following situations apply to you, see a healthcare provider to rule out other causes.

In What Is Menopause? When To See Your Doctor the JH also note:

“Talk to your doctor if you are worried about:

Where may I find Health Topics related to Periods and Menopause?

Where may I find Links related to Periods and Menopause?